D. Quast. An eagke-head buckle with a gemstone


In the collections of the Römisch-Germanisches Zentralmuseum Mainz (RGZM) is a group of antiquities from “Southern Russia” dated to the Migration Period. It is of course just a collective term from the last century, when the RGZM get the first objects from Southern Russia and Ukraine1. Next to objects from well known places like Kerč and Nikopol’ is a larger amount of pieces without (exact) provenance. But even with this reduced information we can reconstruct that lots of them are from the Crimea. In this group of typical Crimean objects is one of special interest, even if it is looking at first view more or less average. It is an eagle-head buckle with a gemstone at the plate — as I know the only example with an engraved stone. It was Irina Petrovna Zaseckaja who offers a few years ago a typological and chronological order for the eagle-head buckles from the Crimea so it seems to be obvious to dedicate this short announcement to her jubilee.
Let us start with the description of the buckle. It is made of silver and copper alloy and has inlays of blue and red glass as well as carnelian. Dimensions are: Length in all: 15,9 cm. Width of the loop: 6,35 cm. Plate (without eagle head): 5,4 × 5,4 cm. Weight: 101,7 gramms.
It consists in general of three parts: the loop, the tongue and the plate. The loop is the variety “13b” in the typology of I. Zaseckaja [14]. Additional to the ornament of scrolls are four single inlays of red glass with convex surface. Remarkable is a probable ancient repairing. The original axis was replaced — in all likelihood is was broken) by a new one, which was made of copper alloy and fixed to the loop with two cope alloy rivets.
These rivets are clearly visible in the muzzles of the animal heads. Both rivets seem to be silvered on the surface.
The tongue is the variety “26e” and shows engraved lines as ornament.
The plate of our buckle (variety “17b”) consists of several components: the right side; the shackle with parts of the reverse plate (both are later repairs), parts of the original reverse plate and a framework at the backside.
The right side is made of silver and decorated with engraved ornaments. The eye of the eagle features a blue glass inlay. In each corner of the plate are inlays, too. Three of them are of red glass, but the one at the top of the leading edge is made of carnelian. All inlays have convex surfaces. 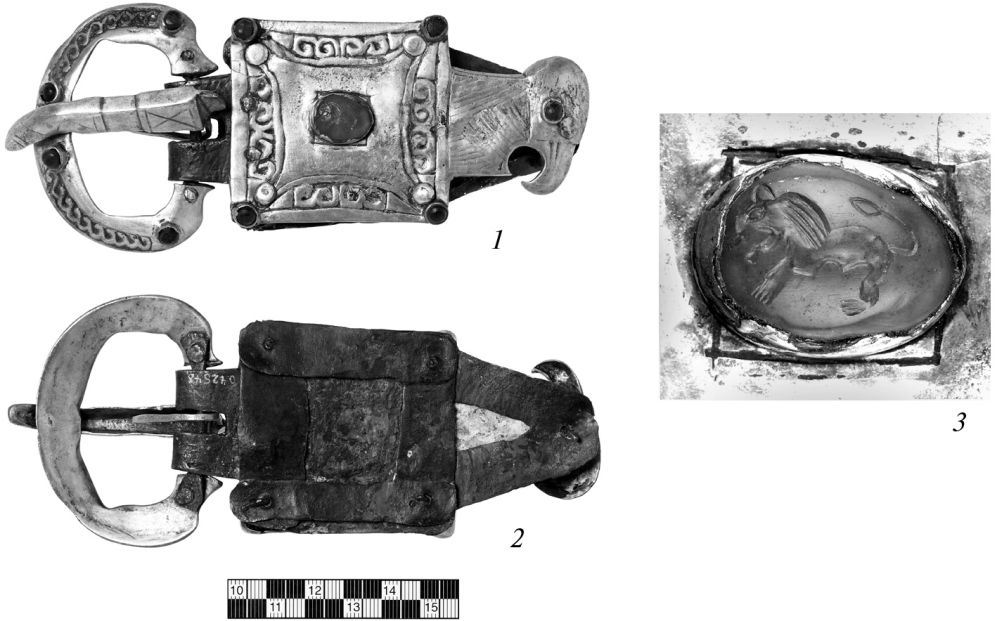 In the centre of the plate is set a gemstone of salmon-reddish carnelian (1,5 × 1,2 cm). The fine engraving shows a lion. The frame of the gem is made of a stripe of silver sheet. Beneath the gem is an engraved rectangle which is partly invisible because it is superposed by the frame. There are a few buckles with circular inlay in the centre framed by rectangular engravings, but they are larger than the inlay, the are real framings [1, c. 208, fig. 29: 3; 14, p. 93, fig. 6, 5.7; p. 97 fig. 8]. The RGZM buckle offers another presumption. It could be possible that primarily there was a rectangular inlay
typical for plates of variety “17b1” of I. Zaseckaja. The gem was a later attached
either because the original inlay was lost or simply because the gem was more “attractive”.

Next to the inlays in the corners of the plate of the RGZM buckle are the silver heads of the copper alloy rivets, which bond the right side of the plate with the frame work at the backside. Additionally there are two rivets at the leading edge made of copper alloy and silvered on the surface. They were used for a repair. The shackle and large parts of the reverse plate are of copper alloy, too and a later substitute for the broken original which was made of silver. Parts of it are conserved at the back of the eagle head. As usual for the eagle head buckles from the Crimea there is a framework at the backside
consisting of bars of sheet of copper alloy to give the construction of the buckle
esp. the bonding with the belt more stability.

The unique character of the RGZM buckle is given by the gemstone in the centre of the plate. It is a very fine engraving and shows a lion. This motive is not unusual on gems [8, nr. 191–196; 9, nr. 203–205 und nr. 282–283 (glass-Cameos)] but I wasn’t able to find an exact parallel3. Even if our buckle is the only specimen of an eagle-head buckle with gemstone, there were some more examples of other buckle types from Late Antiquity. The known copies are all from the circum Mediterraneum, but unfortunately without close provenance. A special group is characterised by the fact, that the whole plate is engaged by the gemstone. A few examples of this group are said to be from “Spain” [13, nos. 547–550]. Another one was detected — together with three other belt fittings with gems — during the excavations in Uročišče Makartet in Ukraine [3, s. 230]. The loop and the tongue are lost (fig. 3: 3 above right side). Other buckles with rectangular plates with garnet cloisonée hold a gemstone in the centre. Spier [13, nos. 497; 510; 552; 551; 561; 563] represent examples from „Asia Minor“ (fig. 3: 2), „Syria“ and „Israel“. All of them are from late 5th — early 6th century AD.

Of interest are some “cheap” copies, where the “gem” is made not of semi-precious stone but of nacre. More than 20 years ago was a specimen of this group said to be from “Syria” in the “art market”, combined with a counter plate as well with a nacre “gem” [6, nr. 314]. More important is the buckle from Argamum (Capul Dolojman, village of Unirea, former village of Jurilovca, Rumania) in the Roman province Scythia minor. It was
found during excavations in the area of the late antique necropolis [7].
As the one from “Syria” the engraved nacre plate shows a dove, but in Argamum is additionally engraved the name “ΜΙΧΑΗΛ” in Greek letters (fig. 3: 1). In front of the dove is a small cross, which emphasizes the Christian character of the image. The same could be said about all other gems in late antique buckle plates. They show angels with crosses, doves and inscriptions. 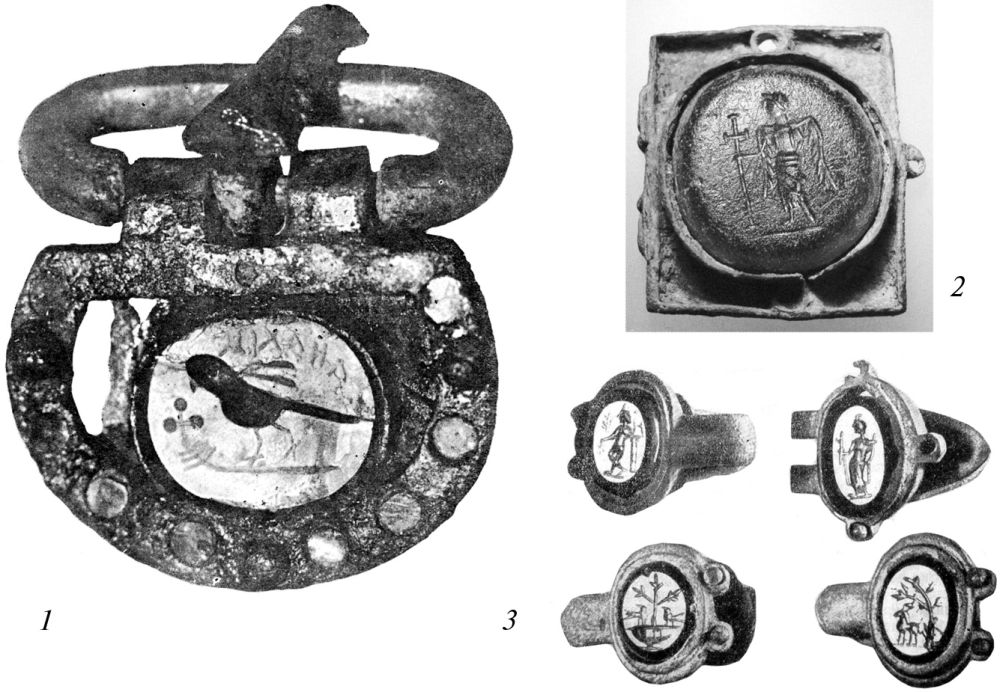 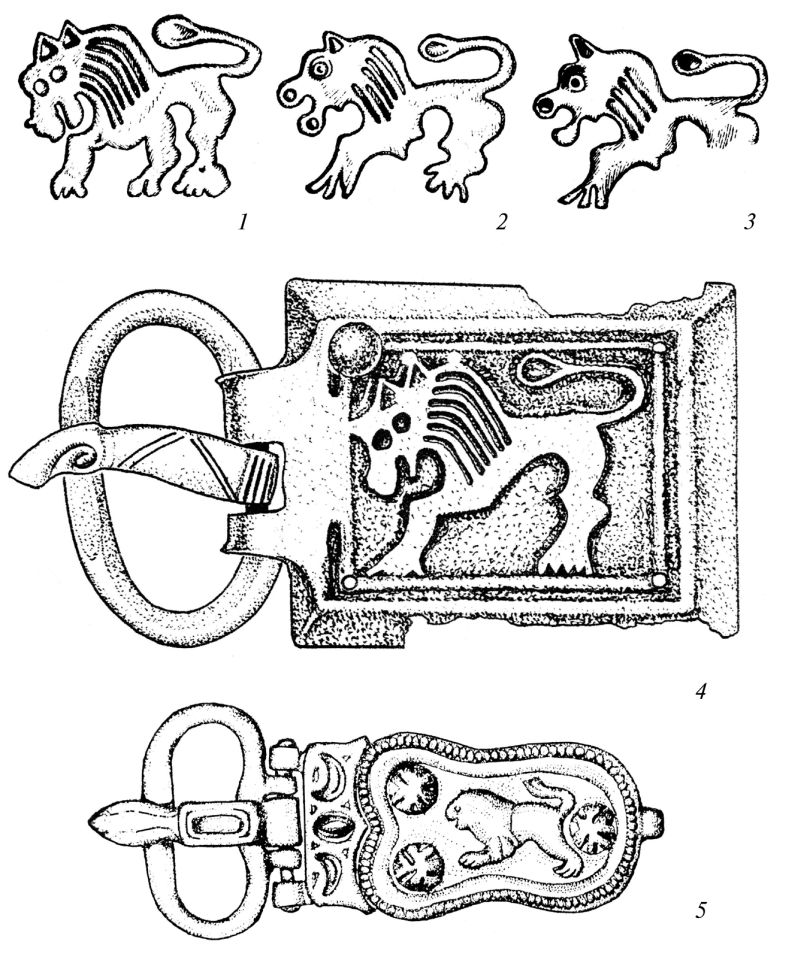 So it seems quite probable that the gem of the RGZM buckle was a contemporary one and not a re-used antique example4, even if the gem was not manufactured for the buckle. It was an intentional addition and we can believe that the owner knows something about its symbolic meaning and combines the eagle and the lion, both symbols “in action” on Crimea in the 6th century.
Unfortunately we only can speculate, if the different types of buckles are additionally symbols of any kind of group identity or simply markets of different workshops. Noteworthy is that a belt buckle of not the highest quality is valorised by a gem of fine quality. Maybe the owner gets the gem just by chance; maybe we are with the group of persons wearing those kinds of buckles in social level, who took part in diplomatic affairs on a low level.


I am indebted to Dr. Susanne Greiff, RGZM for the material analyses of
the inlays of the buckle and René Müller, RGZM, for the photographs.


1 A complete catalogue of this collection is in preparation by A. Furasjev and D. Quast.
2 Cf. in general for the different standpoints in the chronological discussion lastly in [11, s. 34–37] (with Literature).
3 It must clearly be mentioned that I am not a specialist for gems! If here are any parallels I would be grateful for an advice.
4 The re-use of antique gems in merovingian and later, high medieval objects was common and important fort he development of medieval gem-working [5; 10].
<<Назад   Вперёд>>
Просмотров: 8198